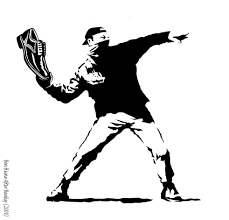 In the week that President Bush had shoes thrown at him by an Iraqi
journalist and a delivery man was saved by a pizza, I was prompted to reflect on the learning potential of feedback.
To explain, George Bush had shoes thrown at him in Baghdad, although he was agile enough to avoid both missiles. He then showed presence of mind and even statesmanship by defending the man’s right to protest in a free society and pointing out to journalists that his assailant had succeeded in getting people talking about his protest.
The other story relates to how a Florida pizza delivery man was challenged by armed robbers in the city of Miramar, but got in first with his own weapon – a large pepperoni pizza. Eric Lopez Devictoria, flung the piping hot pizza at the gunman, then turned on his heels and ran, making a safe getaway, despite one shot being fired as he fled. Police later arrested three teenage suspects, who have been charged with armed robbery.
I came across these two stories as I was thinking about how some people still cower in their comfort zones, avoiding risk and change. If you want to develop, you need to step out of your areas of competence and confidence, and challenge your fears. Children have few fears and often explore the world with wild abandon. As they mature they are taught and learn to respect and even fear experiencing some life situations and activities. While this is useful learning in some potentially dangerous situations, they can develop the unfortunate idea that to try anything new and failing is embarrassing and uncomfortable and should be avoided.

This learned fear of failure can become stronger as we grow older and severely limit our development. One way of learning is to invite, contemplate and act on feedback. If we don’t ask for it, or worse still ignore it or even punish the giver, we lose that learning channel. As leaders we need to encourage feedback, even if delivered in awkward or rude ways. A mature learner will filter out the insult and listen to the kernel of truth in what has been said. In the same way that George Bush ducked the shoes, but respected the journalist’s right to criticise him!
Remember that feedback is not the absolute truth, but someone else’s perception. To accept feedback constructively you need to:

And finally, this week’s bizarre fact – Please keep all raisins away from your dog… they are extremely toxic to dogs and can be deadly! (I never knew that!)